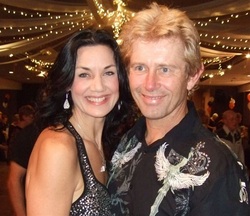 Mark and Kate Simpkin run one of the largest and most successful line dance clubs in Australia, Southern Cross Line Dancers.

Southern Cross Line Dancers have a number of classes each week throughout Western Sydney catering to all levels of line dancers from the very basic beginners right up to the more experienced ‘veterans’ who have danced for years.

Apart from running a highly successful line dance club, Mark and Kate are also successful choreographers, choreographing over 100 dances between them.  These dances include ‘She Said Yes’, ‘Cowboy Boots’, ‘Gypsy Lady’, ‘Long Gone’, ‘Cheating Heart’,  ‘Get Gone’, ‘The Woman In My Life’ and more recently the award winning ‘Winner At A Losing Game’ (co-choreographed with Travis Taylor), ‘Good Morning Beautiful’, ‘From Here To Eternity’ and ‘Cowboy & Clown’.

Many of these dances have won national and international awards, and Mark was recognised for his skills in choreography, winning the Australian Choreographer of the Year in 2006 and 2008 and was runner up to this award in 2007.

Mark and Kate are ambassadors of Australian line dancing, instructing throughout the world and appearing on several television programs worldwide to promote line dancing.  Mark has also produced several instructional line dance videos in which he teaches line dancing to novices and beginners around the world.  These videos include ”Line Dancing Australian Style”, “All Time Greatest Line Dancing Volume 1 and 2”, and “Line Dancing With The Best”, and they were so successful that they achieved gold and platinum sales.

Mark and Kate would like to thank everybody who assisted in making the 2009/2010 NSW Open Linedance Championships possible, including all of the sponsors, judges, scorers and assistants.

Mark and Kate hope you enjoy your time at the NSW Open Linedance Championships and hope to see you back in 2011!